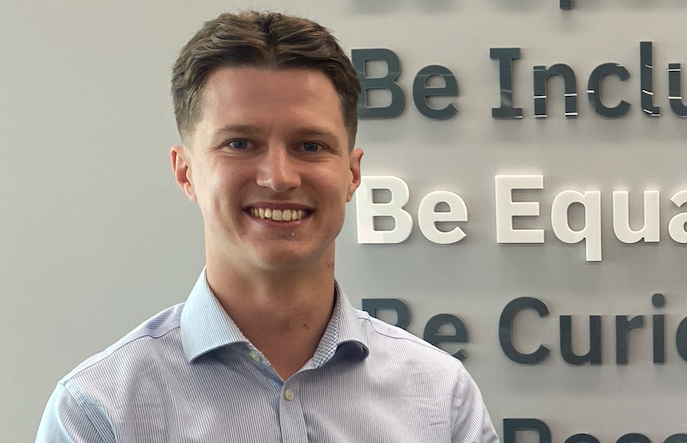 Having studied maths, physics and PE at A Level, Luke Johnson went on to study maths and physics at the University of York, particularly enjoying the quantum elements of his studies, which culminated in a research project in quantum computing. After graduating, Luke applied to join IBM’s graduate scheme and was successful. He now works as a ‘Customer Success Manager – Architect’ for the company, as well as being an IBM Quantum Ambassador. We caught up with Luke to find out more about his career journey to date, what skills and experiences he thinks are important in a role like his, and advice he’d give to others interested in following a similar path.

What initially inspired you to get involved in the field of quantum?

I took maths, physics and PE at A Level and then went to the University of York. I originally intended to study maths on its own. I was always better at maths than physics and thought it therefore made sense to study maths, but I’d had a really inspirational physics teacher so I enjoyed physics more and found it more interesting. I achieved the same grade in both subjects at A Level and that gave me the confidence to consider that perhaps I was just as good at physics after all, so after a week of soul searching at university I swapped to maths and physics.

Studying maths or physics at school is very different to university and I think the advantage of doing both was that physics requires a lot of maths. I’d actually say the hardest part about studying quantum physics and quantum mechanics was the maths, other than understanding the theory.  I think my maths courses helped, so much so that I actually achieved my best grades in quantum.

You don’t really study quantum at school, but once I got to university I studied a quantum module every year. For my final year research project I chose ‘Superconducting flux qubits – a candidate for universal quantum computation’ and my supervisor was none other than the Quantum Communications Hub Director, Professor Tim Spiller. The project was theoretical rather than  experimental. At the end of the project, I did an industry summary on quantum computing and IBM, where I work today. Those were my first steps to getting me into quantum along with some Qiskit programming that I really enjoyed. After university I took a year out and travelled. I attended an assessment centre just before leaving and actually had my interview for my first role at IBM from Cambodia, online in a little hut! When I returned a few weeks later I started working at IBM and haven’t looked back.

I understand that you are a ‘Customer Success Manager – Architect’ at IBM; can you tell us a little bit more about what your role involves and what a typical day at work is like for you?

IBM has a suite of products called Cloud Paks which are designed to help organisations manipulate data, run machine learning algorithms, integrate data between different applications, store and secure data, plus plenty of other capabilities. I am essentially a technical resource for our clients to access and to assist with their IBM software entitlements. I get assigned clients who will have purchased entitlements for a specific Cloud Pak and my job is to help those clients deploy them for whatever purpose they need. I help them to get the most value out of their entitlements. I am their technical advisor; they can come to me with problems they need to solve and I work with them to recommend and build those solutions using IBM technology and pull in various IBM teams as needed.

You are a Quantum Ambassador for IBM, what does this mean and involve?

IBM Quantum Ambassadors are evangelists for not only IBM’s capabilities, but quantum computing generally – and to both internal and external audiences. Whether that be the history of the technology, the roadmap for the future, or the benefits that it could bring – including the problems we think we could potentially solve in the future. We’re a worldwide team that speaks to our clients and gets them interested in quantum, teaches them about quantum and tells them how they can engage with us on their own quantum journeys.

What do you enjoy most about your job?

Being both a Customer Success Manager and a Quantum Ambassador require me to be client facing nearly all of the time. I spend a lot of time having conversations with them about really interesting and cool technologies, whether it’s quantum or data or integration, the list goes on! It’s all really exciting and varied but always has the common aim to solve our client’s real business problems.

The second thing I really enjoy is the fact there are technical things that I have to learn and understand. I can’t just half understand quantum computing, I have to understand it to a very deep level to be able to speak to technical stakeholders.

Thirdly, I really enjoy being a part of the community around me. IBM recently won the targetjobs “graduate employer of the year” award for the fifth time in a row, and I think that speaks volumes about the community and the scheme, it’s amazing. The support and training that I get is excellent and I’m supported to take my career in any direction I want. One final thing I’d like to add is that I enjoy the level of independence I have. In both of my roles, I feel trusted by the leadership team to do my job and I’m involved in the decision-making processes which is great.

What transferrable skills do you think you have gained throughout your career so far and what do you think are the most important skills for working in a role like yours?

First of all, communication is key. Being able to talk to a client and have a good conversation with them is very important in many roles like mine. Number two is technical knowledge – you’ve got to understand the product you’re representing, and the things you’re talking about. I’d also say programming skills in languages such as Python and Qiskit, which is the open-source software development kit used by IBM, is very useful. Qiskit is available on GitHub, and actually has a free textbook, which is great as it takes you through brief areas of quantum mechanics and through coding on a quantum computer. There are over 300 Qiskit volunteers worldwide (I’m one of them) who run hackathons and other events for schools.

What experiences do you think are valuable for someone hoping to work in a role like yours? Did you undertake any training in particular prior to starting your role that you think was crucial in helping you to secure it?

During my final year project at university, I worked on quantum computing and carried out some of that work using Qiskit. I also did some Python work in unrelated modules in maths and I think both of these experiences were valuable. Other experiences such as giving presentations are also really useful. For example, I found my final year project viva – where you basically defend your project – was good preparation as you essentially have to do that in industry when giving information about a product.

Along with Qiskit, I’d say it would be good to have a go at the IBM Quantum Challenge. This takes place at least once, if not twice, a year and happens across four days. This year it’s happening on 23rd May. It gives you the opportunity to learn Qiskit and solve real challenges. There’s a great community and there are mentors available that you can contact on a dedicated Slack channel for support. You can also access previous challenges on GitHub.

There are a lot of possibilities and there are a lot of problems that we could potentially solve. You can see these on the IBM quantum roadmap. Areas such as optimisation, natural sciences, finance and machine learning are interesting areas and natural fits for quantum computing.

My personal hope for the future is to work even more on quantum than I do already. It’s something that really, really interests me, and I’d love to spend all of my time working on it. IBM’s goals are very well publicised in our roadmap. We aim to develop our hardware, increase the number of qubits in our chips, enhance the software runtimes and architecture that work with our quantum devices – and all in the pursuit of real Quantum Advantage. That’s what we’re aiming for, gaining an advantage in a real use case, in a real business situation; whether that be solving a problem faster, or more accurately, or cheaper, or in some other advantageous way.

I also want quantum at IBM to stay as open as possible. We’ve got a really great open-source community around it, for example, you can access seven of our quantum systems for free via IBM Cloud today, and that’s amazing. That’s something other providers currently don’t offer, and I think it helps people get excited about quantum computing. It’s great that people can go online to quantum-computing.ibm.com and run a real experiment on a real quantum computer from wherever they are, rather than using a simulator. Keeping access open, keeping Qiskit open-source and the textbook free is something I’m really passionate and hopeful about.

I’d say be curious and be open to exploring lots of different areas of technology, STEM and others. When I joined university I was just going to be a maths student, I could have just done three years of maths and then gone to work in a bank which would have been fine, really! However, keeping myself open-minded and curious about other areas such as exploring quantum computing and quantum mechanics has led me to the great opportunities I have today at IBM. I think it’s also about enjoying yourself – find something you’re passionate about and you’ll go far – and finally take as many opportunities as you can!