An interview with a Quantum Scientist – Dr Rupesh Kumar, University of York 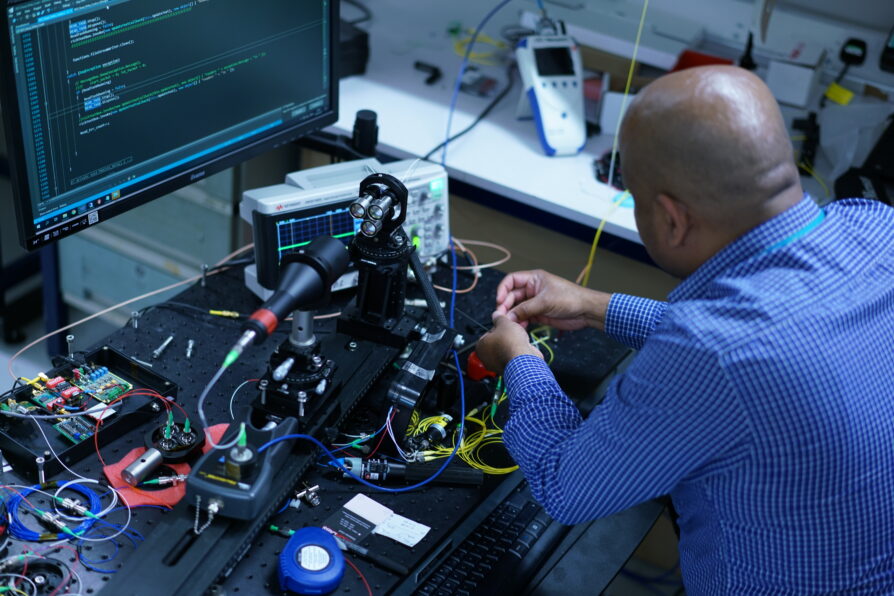 As a child, Dr Rupesh Kumar always enjoyed working with his hands and had an affinity for subjects like mathematics and science, so becoming an experimental physicist was quite a natural career choice for him. Rupesh started by studying for a Masters in Physics at Mahatma Gandhi University, India, before undertaking a PhD in quantum communications at the University of Camerino, Italy. Following that, he moved to Poland where he worked at the Nicolaus Copernicus University and the University of Warsaw to continue his work on quantum communications. Rupesh subsequently moved to Télécom ParisTech, Paris, and in 2015 he joined the University of York as a member of the Quantum Communications Hub, where he still works today. Rupesh also spent a period of time on secondment at the University of Cambridge. We caught up with Rupesh to find out more about his career in quantum so far, his work and the advice he’d give to those hoping to pursue a career in quantum.

It’s clear that you’re very passionate about your work, but what interested you in quantum and quantum communications in particular? It’s an optional direction, so what attracted you?

During my childhood I really enjoyed making things with my hands, when I built things, I felt quite satisfied and proud of myself. The same thing happened with maths, when I solved a maths problem and found the answer without help from anyone, I felt proud. I naturally wanted to work in a field where I could use my hands and build things. I wanted to use my abilities and make my contribution to the development and progression of humanity. Initially I hoped to become an astrophysicist and planned to do a PhD in that after I had completed my undergraduate studies, however, when I saw lasers in laboratories and got some hands-on experience with them, I changed direction and wanted to work with them instead. Initially I was working with bright lasers and then started to work with low-level lasers and learn about fundamental things such as quantum mechanics. I could see the effects of quantum mechanics happening before my eyes and this fascinated me so I decided to do a PhD in quantum, specifically in quantum communications and Quantum Key Distribution (QKD -a provably secure method of distributing encryption keys). I chose to specialise in quantum communications as it is the future and a field that is perfectly matched to my passions and abilities. There is still a lot of work to be done, a lot of things need to be invented, for example, to increase the transmission distance, enable quantum communications in space and so on. There’s a huge market for quantum communications and therefore huge potential for fascinating projects to be developed in this area.

In the simplest terms, my work is focused on developing unbreakable systems for data transmission. I work with light where it is considered as wave (as opposed to a particle) and I modulate the amplitude and phase of light waves in order to manipulate and use them to secure the transmission of data. Essentially, I use the quantum properties of light to encode and decode secret information. I’m trying to build systems which enable us to implement secure communication channels in optical fibre and also through free space. More specifically, I am working on a form of QKD called Continuous Variable QKD. This type of QKD uses light which has continuous values of amplitude and phase (as opposed to discrete values), which in turn gives many advantages including the ability to transmit information in daylight, without being affected by background light. Ultimately, my work will help to enable data to be transmitted securely, meaning people will have guaranteed privacy.

Is there such a thing as a typical day for you and if so, what does it entail?

A typical day for me would involve heading to my office, checking emails and replying to urgent ones, ordering items for the lab, if any, and attending meetings. I then spend a lot of time in the lab building and testing technologies. Sometimes, if I’m working from home, I connect remotely to the systems in the lab or elsewhere and obtain data from those to work on.

I’m really excited to see quantum communications technologies being used more widely. In the future we will have increasing amounts of data and will need to implement these new ways of securing it. I’m excited to see multimode systems in operation, by this I mean systems which have lots of different elements, for example, networks that involve fibre-optic cables and also satellites to create complete quantum secure communications systems, essentially forming a secure net right around the world.

What do you think are the most important skills for a career in quantum?

I think it depends on the area of quantum science that you want to work in. However, to work in experimental quantum communications you need to be a multi-skilled person who is ready and able to do anything, right from building a system from scratch, to testing the system, talking to potential collaborators, maintaining and even cleaning the lab if need be!

Having an understanding of quantum mechanics and software programming is key but beyond that you also need to have a broad understanding of the work going on across the field, this helps you to come up with new ideas and also to see potential applications of your work that you may not have known about if your knowledge was limited to one specific area. A wide range of knowledge also helps you to spot opportunities and develop new research project ideas that you may not have considered otherwise.

You must have self-motivation and an in-built drive to succeed. However, you must also be willing to fail in this field. Sometimes things go wrong, experiments don’t work, you have setbacks and you must be resilient and willing to accept those. We learn so much from failing, it’s actually a good thing and helps us to develop in science. My motto is to never give up. We must accept failures and frustrations but use them as a drive to carry on with our mission. There is always light at the end of the tunnel.

I would also advise people to be patient and to work systematically, that means you don’t have to go back and re-do many things. However, if things do need to be re-done or they do break or fail, as I said, you gain more knowledge and grow from that experience anyway.