An interview with a Quantum Scientist – Dr Siddarth Koduru Joshi, University of Bristol 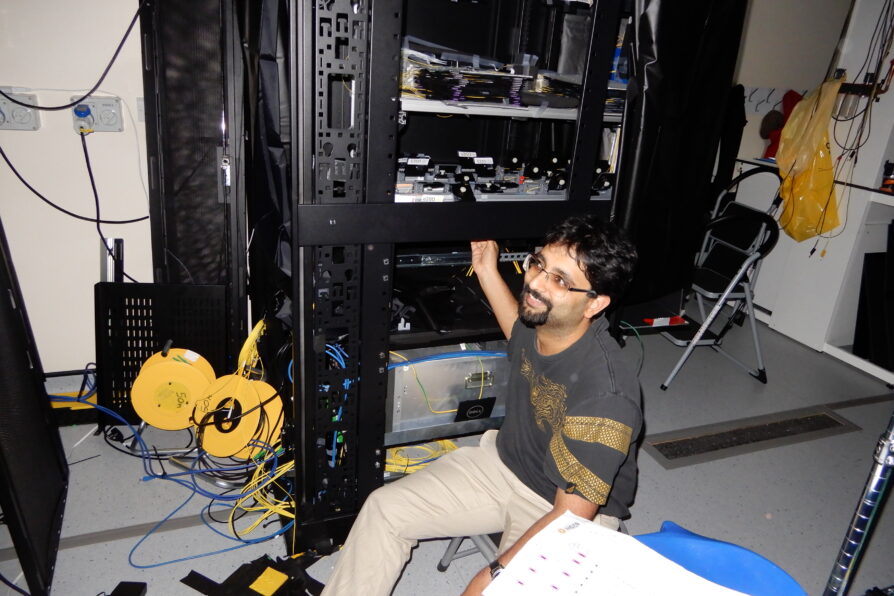 Dr Siddarth Koduru Joshi had a keen interest in physics from a very early age and as he and his understanding of physics grew, his interest in quantum quickly developed. Siddarth studied for an undergraduate degree in Physics at Bangalore University, however, this left him wanting more and so he participated in a programme which enabled him to carry out mini research projects, including some on quantum, every weekend throughout his degree to help prepare himself for his dream career as a physicist. Siddarth then undertook a Masters, also in Bangalore, before taking up a PhD in quantum in Singapore working with Christian Kurtsiefer. Following this, Siddarth moved to Vienna, to work with Rupert Ursin on free-space quantum communications, before he moved to the UK to join the University of Bristol and through that, the Quantum Communications Hub. We caught up with Siddarth to find out more about his career in quantum, the technologies he is developing and his hopes for the future.

It’s clear that you’re very passionate about your work, but what interested you in quantum and quantum communications in particular? It’s an optional direction, so what attracted you?

I was interested in physics from about five or six years old, from that really early age I knew I would be a physicist and I always worked towards that goal. I became interested in quantum more specifically when I was able to understand physics more and see all of the cutting-edge things that could be done with it. During the weekend research programme I attended, I spent some time working with trapped ions and from there my interest in quantum continued to grow. Also, as an experimentalist, one of my main aims is to work with the coolest pieces of equipment and technology in physics and they are in in quantum!

At the minute I’m working on many different projects, but a main focus for me is quantum networks. Quantum communications have been around since 1984, before I was born, and yet I still don’t have quantum communications in my home today! The reason for this is the very reason that quantum communications technologies are so secure, you cannot make a copy of a quantum state without destroying or disturbing that state (the so-called “no cloning theorem”), and this means that we can’t build a quantum network or a quantum internet in the same way as the regular internet where one computer passes information on to the next and so on. Quantum networks are a whole new challenge and are required if we are to connect billions of people with quantum technologies together. Along with my colleagues, I am working on ways to start connecting more and more users together, we started by connecting four users, then eight and now we’re trying to build networks with even more users. Secure communications are just the tip of the iceberg when it comes to quantum networks though, they will also enable us to connect quantum computers, quantum sensors and all other quantum technologies effectively, essentially creating the quantum internet which will work in addition to the existing internet.

Can you tell us what the quantum internet will mean for our everyday lives?

Imagine having a computer that isn’t connected to the internet. How useful is it? It’s still a marvel of engineering, but, if you don’t connect it to the internet, its uses are limited. To get the full power out of your computer, you connect it to the internet so you can connect it to all sorts of other devices and enable these devices to communicate and talk to each other. Now, if they can communicate and talk to each other quickly and easily, then you get a seamless experience and can use it to do many fantastic things. When quantum computers and other quantum technologies are available, we will want to have access to them at our fingertips, we’ll want them all to be fully connected in order for us to get maximum use out of them. We don’t want them to sit in isolation in a lab somewhere. In order to connect all of our quantum technologies together and get maximum use out of them, we will need the quantum internet. It will enable us to connect quantum technologies together to have maximum impact upon our lives.

You say the quantum internet would be used in addition to the classical internet but why do we need both?

The difference between the quantum world and the classical world is that in the quantum world you can do tasks that you could not do in the classical world. It’s not that quantum technologies offer, for example, a next generation processor that will be incredibly powerful and fast, it’s something that can do different things in a fundamentally different way, which means that the way you address big problems can become incredibly easy and simple. However, to enable any of these quantum technologies to work, they need to make measurements of quantum states and exchange the results of these measurements classically. The results of these measurements are always classical, so even when we have the quantum internet, we will still need the classical internet for communications too. We are creating something that runs in parallel and adds to the classical internet, not replacing it.

You also work on satellite quantum communications; can you tell us more about them and what they will enable?

Because quantum states cannot be duplicated, and you inevitably encounter some loss of a quantum signal when it is transmitted through an optical fibre, this means that, after a signal travels a certain distance, it is completely lost, meaning that the distance of any quantum network is limited. The current record is about 400-600 kilometres, so, the big question is, how do you get quantum secured communications right around the globe? The answer is to deploy quantum communications technologies in space via satellites. As part of the Quantum Communications Hub, we’re building a satellite that’s about the size of a shoebox (a so-called cube satellite or CubeSat) into which we will pack all the necessary technology for the satellite to find a ground station and send the quantum signal down. We are also building a mobile ground station which is essentially a large telescope placed inside a van, meaning we can move the ground station around and avoid the UK’s notoriously cloudy weather! Satellite quantum communications will mean that we can have quantum secured communications right around the world.

You also work on quantum imaging, can you tell us a bit about your work in this area?

Sometimes in situations where light is sent through a sample, the light can damage the sample. For example, if a microscope is shining light through a delicate sample, say your eye for example, the sample can become damaged if there is too much light. Unfortunately, the precision of any measurement is fundamentally limited by the amount of light passing through the sample. What I am working on is developing technologies that use single photons (particles of light) but that can still create high-resolution images. What we are trying to build are brighter single photon light sources that can compete with and beat classical technologies in terms of the low levels of light used with the highest quality of images. Ultimately we want to create highly precise imaging technologies without damage caused by light.

Is there such a thing as a typical day for you and if so, what does it entail?

Essentially, I spend my days working with various pieces of equipment and technology in the lab and trying to build something that works! The components I use most often are things like lasers, lenses, mirrors, optical fibres and other optical components. Alongside working in the lab, I also spend a lot of time writing proposals for grants and sending emails and so on.

I am excited to start seeing quantum technologies move out of the lab and into people’s everyday lives soon. I am excited to see quantum networks in use for secure communications, meaning everybody gets the privacy that they have a fundamental right to. Classical encryption doesn’t provide a security guarantee anymore and there is also the threat of the arrival of quantum computers so I look forward to being able to secure my own private data, for example, my medical records, land ownership and so on, using quantum technologies.

In the longer term, say in 15 to 20 years, I’d like to start seeing the benefits of quantum computers trickle down into everyday life. It will be great to see applications such as better medicines, increased energy efficiency, improved modeling of climate change, and more efficient design processes for things like laptops and mobile phones. I’d love to have a device such as a mobile phone designed by a quantum computer!

What advice would you give to young people who hope to pursue a career quantum or STEM in general?

Do it! Essentially, if you find something you like, do it. I’m very fortunate because I’m one of the few people who gets paid to enjoy my hobby and that’s the biggest benefit of pursuing your interests!

You must have perseverance and resilience. There are times when things get difficult, it takes a considerable amount of perseverance to push past these difficulties and keep going but it can be done.

People are often put off by quantum as they think it is something that’s very difficult to understand and is extremely complicated and abstract. It isn’t it, it’s just that it has fundamentally different rules to what you’re used to, but once you get to grips with those, it’s easy. Nowadays you can actually see these rules in operation in the lab, once you have seen them working, you can develop an intuition for them, so there’s nothing to be scared of. I think that developing this kind of intuitive understanding of your field is very important, whatever piece of research you’re working on.

If you’d like to read more about Siddarth’s recent breakthrough for a future quantum internet, have a look at his recent article in The Conversation.