An interview with a Research Scientist– Benyam Dejen, NPL 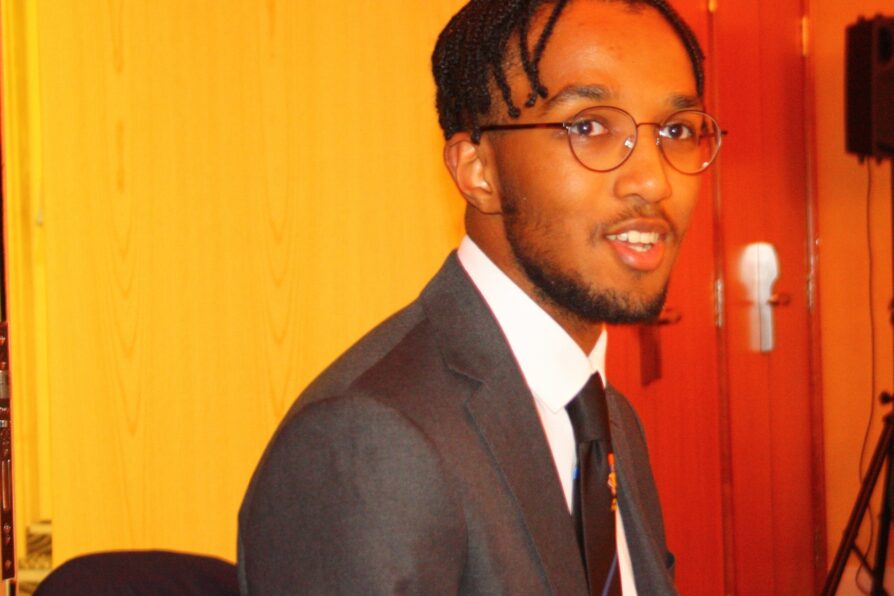 Having studied maths, further maths, physics and economics at A Level, Benyam Dejen decided to study for an integrated Master’s degree in Physics at Imperial College London. While he was there, his eyes opened to the world of quantum, and he was inspired to pursue a career in the field. Benyam now works at the National Physical Laboratory (NPL) on a major collaborative project on the assurance of quantum random number generators. We caught up with Benyam to find out more about his journey in quantum so far, what inspired him to join the field and advice he’d give to others hoping to do the same.

You have a background in physics, but can you tell us a little more about your journey to working in quantum specifically? What inspired you to take this path?

I studied A Levels in maths, further maths, physics and economics, although I only did one year of economics. They were all quite fun and I think that doing further maths was particularly helpful for going into physics because it helped me to make a smoother transition into university. I did my undergraduate degree at Imperial College London and I graduated in 2021 with an integrated Masters in Physics. It was during my degree that I discovered quantum physics. I was fortunate that at my university I had the opportunity to dive into quantum in my first year where I got a quick overview of the core ideas in quantum and I thought it was fun! I thought that concepts like quantum tunnelling (that if you fire an electron at a barrier it doesn’t classically have the energy to pass, that in quantum mechanics formulation there is a probability it could tunnel through), were incredible. If you were playing football, you wouldn’t see the effects at work, a ball couldn’t hit the goal post and then tunnel into the goal!

For centuries, people have been trying to send encrypted information over long distances and it bothered me that until this day adversaries could still hack these, so for one of my assignments I chose to research what could be done to improve the security of our communications and that’s when I stumbled upon quantum communications. The fact that you cannot copy quantum information without destroying it (the so-called no cloning theorem) is critical to making these communications secure and that’s what kickstarted my desire to look deeper into it and get involved. I did my Master’s project in photonics and that’s what led me to join NPL as a research scientist in the Quantum Information Processing Group. Alongside my studies, I lead outreach at The Blackett Lab Family, which is an organisation which aims to promote representation of black people in physics at all levels in the UK.

Can you tell us a little more about NPL and what made you decide to pursue a career there?

Scientists at  NPL do a lot of cool research into a variety of different things and provide  critical services to many industries. The work of my team (Quantum Photonics) is centred between academia and industry and this has made it a great place to work as a new graduate interested in quantum technology. The quantum technology landscape is constantly and rapidly evolving hence being positioned between academia and industry has given me a valuable perspective. For example, the project I am working on is a collaboration between NPL, numerous other companies and universities to give assurance to quantum random number generators and so I can see how the whole industry blends together. It’s also close to London which is great because there’s a lot going on there!

At the moment, you’re working on assessing the performance of quantum random number generators (QRNGs). Can you tell us a bit more about QRNGs, their applications and why assessing their performance is so important?

Random numbers are useful in several different areas in everyday life, including in cryptography. The problem for cryptography is random number generators used to generate cryptographic keys (which encrypt and decrypt data) are not unbiased and unpredictable. An adversary with enough knowledge about that algorithm or physical process generating the random numbers could predict the output and thereby intercept and read the data. This is obviously problematic for governments, healthcare systems, companies and individuals. The only way that we know we can produce truly random numbers is by using natural processes that are inherently random and quantum processes fall into that category, so that’s what my project is all about. There are companies in the UK that are making products that leverage these natural processes to generate truly random numbers and the aim of my project is to assure us that the numbers that are being generated are definitely random. In the project, companies which have built the devices supply them to NPL where we develop methods and perform measurements of the devices. The measurements are then fed into models that the University of York is producing to assess the quantum-ness of the output, after which the University of Kent will then do some post-processing analysis on the outputs to prove that the numbers produced are unbiased and unpredictable. Eventually these QRNGs will be available on the market and provide customers with random numbers that really are random.

I am very fortunate to be working in a place where there is a variety of different things to do. My work is mainly experimental, so my days usually involve trying to take measurements, figuring out what’s working and what’s not working – typically things are not working as expected more often than they are. Then at the end of the day or week, hopefully I have some useful data. By that point I will have also written some code that can analyse my data and produce graphs that we can draw conclusions from. At the end of a project, I will draft a report with the measurements that I have and supply it to the rest of the consortium for their information and to help them with the next steps.

Because I am so new to the field, I’m just discovering what stages we’re at with these technologies and what they could deliver. However, I am really excited about the work we are doing around random numbers and quantum communications at NPL and look forward to these two coming together and enabling governments, companies or people to communicate completely securely, wherever they are in the world.

I have a tough time thinking about the future just because I am aware of how little I know about what is out there! Some of the people I have met at NPL have PhDs and they have done some interesting research in their lifetime and so it is possible that the next step for me is to find a research group working on something interesting at a university and get my PhD. I think that regardless of what I do, in some capacity, I always want to be involved in quantum because I think it is going to be part of our critical infrastructure for the future and will play a big role in our lives.

Earlier you mentioned you are a co-founder of The Blackett Lab Family, can you tell us a little bit more about this and its aims. Also, do you feel that you have encountered any barriers in your career so far?

The Blackett Lab Family is a community interest company that was founded in 2020 and we aim to promote representation of black people at all levels in the field of physics. There is a ‘leaking pipeline’ whereby at every academic stage from GCSE onwards, data suggests that there are a disproportionate amount of many black physicists dropping out of the field, and we are in a situation where we have very little representation at higher levels in the academic field. There are a myriad of negative consequences that arise as a results and we are trying to address those by getting more black students enthusiastic about physics and connecting professionals with one another. There is a lot more information on our website and I would encourage people to visit the page and find out more.

What transferrable skills or experiences do you think you have gained throughout your career and what do you think are the most important for a career in quantum?

I cannot speak for the entire quantum industry because there are so many ways for you to become involved. Along with entering quantum from a STEM background, you can also enter from the business side of things. There is a lot of work required to bring technologies from the lab and to the consumer market and so, for example, you could be involved by being a patent lawyer or a business specialist and they would require different skills. However, to become an experimental physicist, I think perhaps the most critical thing is to be confident in maths. You do not have to be great at maths from the beginning of your schooling but you must have a willingness to learn. Aside from that, one of the best experiences I had that enabled me to develop necessary skills is doing lab work at university.  At first, I did not like it at all, and it took me a few years to get used to it, but here I am now sitting in a lab as I give this interview! Finally, I think communication skills are key, both written and verbal, you have got to be able to write reports and communicate with other scientists, so this is an important and very transferrable skill.

I would say it is a great thing to do! There’s so much fun and pride in contributing to the development of new ideas. It’s fun to be working  in a lab, putting experiments together and dedicating your time developing an understanding for how things work. Most universities teach quantum as part of their physics undergraduate degree so joining one of these courses would be my recommendation to young people who are interested in quantum. Also, do some reading, there are many accessible articles out there and at some point, the knowledge you will pick up from reading them all will be really useful in helping you decide what you would like to specialise in!

To find out more about the work of The Blackett Lab Family, visit https://theblackettlabfamily.com/ or follow them at @blackettlabfam on Twitter