An interview with a Research Technician in Quantum – Dr Sébastien Guilbaud, University of York 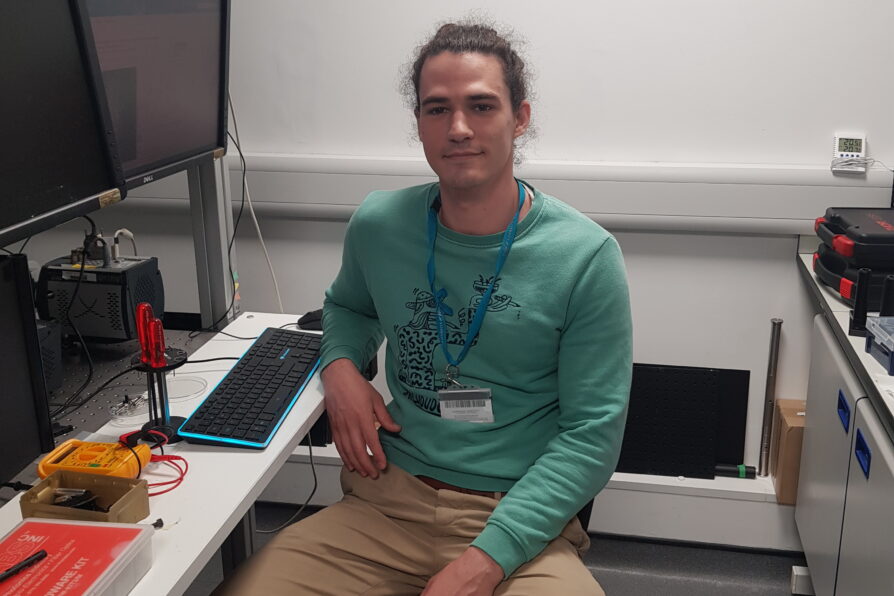 Originally from France, Dr Sébastien Guilbaud began his career in science by studying chemistry at undergraduate level before moving to study biophysics at postgraduate level. After deciding that the classic academic career path was not for him, Sebastien chose to pursue a career in research support, specifically in the role of research technician. This ultimately allowed him to remain heavily involved in academic research, without carrying out his own independent research. We caught up with Sébastien to find out more about his career journey so far, what his role involves and advice he’d give to others considering taking up a similar role.

I understand that you are a technician working in a university laboratory, can you tell us a little bit more about your journey to working in this role? What inspired you to take it up?

I did a Bachelor of Science degree in Chemistry at the Paul Sabatier University in Toulouse (France). I then continued and did a Masters in Biophysics in the same place, before choosing to do a PhD at the University of York in the Physics of Life group, led by Professor Mark Leake. My work focused on controlling the supercoiling state of single DNA molecules, measuring their physical responses, and developing the equipment around that. The natural progression for a PhD student is to go on to hold a few post-doctoral positions, get a fellowship and eventually become a lecturer then finally a tenured professor. This “final” role is extremely attractive, however, the initial positions along the journey were not that attractive to me at all. You can obtain contracts for a couple years here and there, sometimes requiring you to move countries or continents, and there is no guarantee as to where your next job will be. My partner works at the University of York and they have a permanent position there, so it was not attractive at all to go down the academic route as it didn’t seem easily manageable. On the academic career path, because of the fundamental uncertainty of scientific research, you’re always subject to the risk that your project “fails”, leading to a much reduced research publications output. This can be the beginning of a vicious circle where getting new funding becomes harder, etc., the famous “publish or perish”. So I decided to pursue a safer route and move into something that meant I’d be supporting other people’s research, instead of doing my own, but still retaining and developing my own expertise. I chose to leave the academic pathway but still wish to remain involved with academic research as it’s a very nice environment and is quite unique. During and then after my PhD I joined the Department of Physics’ Research Support Team. The role means I can stay in the university and work on research projects with permanent research staff and students within the department. I mostly work on Physics of Life projects which require a lot of biochemical but also optical engineering, which brought me closer to the Experimental Quantum Communications Group. The two fields use bespoke optical systems with very different goals, however, they fundamentally rely on the same underlying physical principles.

Can you tell us a little bit more about what your role involves and what a typical day at work is like for you?

There’s no typical day at work for me, that simply does not exist! I maintain and develop optical systems and use many different techniques and tools to do so. I support students and researchers with their activities, it might be that they have a specific technical requirement that cannot be met by anything they can buy so they need something bespoke to be manufactured or 3D printed, and that’s what I do. It’s a very hardware focused type of work and I really enjoy it. Everything that requires pointing lasers through lenses and mirrors and aiming them at a certain target for a specific purpose is basically what I work with!

The project I’m working on in quantum is aiming to establish quantum secure communications through free space. At the moment, most existing quantum communications systems are fibre-coupled so all the light from lasers goes through a fibre optic cable, which means that you have a direct connection between the two devices communicating with each other. This is usually fine but can be limiting and it simply means that you can’t easily talk to somebody that’s really far away. To do that, we need to take the fibre optic away completely and enable communications through free space, through the environment essentially. This involves a lot of engineering because free space is not a perfect medium compared to an optical fibre, there is turbulence in the air, clouds in the way, people moving around etc., and all of these things limit the delivery of the light from lasers. The project is looking to develop systems that enable communications with airborne devices, so for example, devices on a kite or on a balloon or a high-altitude platform in the stratosphere and potentially even satellites. We are building the system up and pushing it as far as we can in terms of distance between communicating devices. It’s a big engineering challenge but this type of technology will hopefully have a big impact!

How do you find working across multiple projects and disciplines? Do you find it hard moving from a physics of life project to a quantum project or is that part of the fun?

While they are very different fields, they do rely on similar equipment at times, for example, lasers. There’s a lot to learn and I have to become familiar with a lot of new concepts but, fundamentally, as long as I have a coherent overview and can meet the technical goals that’s all that matters. With the fundamental technology being similar it’s not too difficult to move between the areas and the variation is good.

What do you enjoy most about your job?

The University environment is quite a caring one compared to industry. It’s not profit-driven, people tend to be quite understanding and the human relationship aspects of it are really valued. There can be a certain amount of stress at times, but it’s not really externally imposed, if anything, it’s often self- imposed. We aren’t under huge pressure to produce results in strict timeframes, and there’s a great deal of trust from management in people’s abilities and as long as they deliver, they’re very well cared for. We are here to help do science and that’s the priority, unlike a company which is geared towards producing a certain goal or profit margin within a strict budget. Obviously, we do still need money to function, and we have to manage costs, but making money is not our primary goal and that immediately creates a nicer working environment I think.

What transferrable skills do you think you have gained throughout your career and what do you think are the most important skills for working in a role like yours?

My work requires me to support academics and students in areas that they do not have the technical means or direct expertise in, so, for example, in manufacturing custom parts, e.g. by 3D printing. These manufacturing skills are probably the most important thing I’ve learned. After that I’d say designing optical systems, it’s quite straightforward really, but those skills are key to my role. Obviously scientific knowledge in areas such as physics, biology and chemistry is important, however, the central science for technicians is engineering and so and all kinds of engineering skills, e.g. electronic design or even robotics, would be beneficial. They are the things that are not necessarily central to the scientific question underlining the projects themselves but that are crucial in answering them, particularly when devices that are required cannot be bought but have to be made.

What experiences do you think are valuable for someone hoping to work as a technician, particularly in the field of quantum?

Internships! Do as many as possible in as many different areas as you can manage!  To know what it’s like doing scientific research or working to support it, you’ve got to try it out for yourself. You cannot necessarily wait to be given a project that is part of your degree, you need to actually go ahead and talk to the professors to get your foot in the door as early as possible. If you have productive research experience gained through an internship, you will always be favoured over somebody that might have some slightly better grades but has no or less practical experience. Doing internships also enables you to build relationships with different people. I did an internship every year during my studies and that made me stand out because, to be honest, my grades were barely average, but I had a variety of actual research experiences behind me which many didn’t have. Try out as many different disciplines as you can and it will eventually pay off.

You work across a number of areas in physics, however, is there a particular application of quantum technologies that you are particularly excited to see the development of in years to come?

I think quantum communications and in particular quantum encryption is a really exciting area that promises to change a lot. Having the ability to communicate completely privately with somebody else is a cool concept and it will be quite transformative in many ways. I can’t say that the applications will all be positive, but that’s the case for all technologies, however, when it moves out of the labs and into the real world and is applied to real situations it will be really transformative.

I’m happy where I am but the goal is to quickly start growing in seniority and really establish a career here in York. I’d like to focus on some specific elements to become more specialised in, probably optical and biochemical design and technologies related to that. My overall hope is to just keep building up my career while using and developing cutting-edge tools.

I’d say don’t focus on being engaged in one specific area or path by default. For example, don’t just pursue a career in academic research because it seems like that’s what everybody else is doing. Try to think about what you really want to get out of science and consider the many different ways of doing science in different environments or even countries and find out what interests you. Always be on the lookout for learning new skills, don’t just take what is presented in your studies and go along with assignments, as standing out as a university student requires doing original tasks and not just have good grades. It’s possible that you could find yourself doing a PhD and hating research or working in industry and hating the environment, but to avoid finding yourself stuck in that situation, make sure you try lots of things through internships and consider what you want. Also, talk to people who already work in the roles you are considering and ask them about their work, what they like, what they don’t like, what they’d change, what is changing, what isn’t changing and what will never change, and really dig deep to find these things out for yourself in advance. Don’t be afraid of setbacks and change of hearts, as it is always extremely difficult to predict how much you like doing something you haven’t yet been educated in or had practical experience with.