Being a Quantum Scientist – an interview with Laura Huddleston 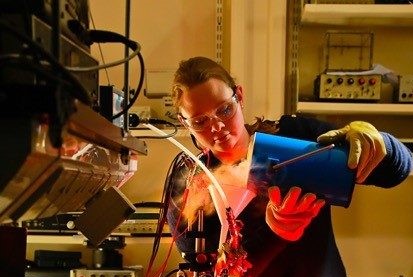 While in the final year of her undergraduate degree in Electrical Engineering, at the Georgia Institute of Technology, Atlanta, Laura applied for and won a position on The Bobby Jones Fellowship exchange programme with the University of St Andrews in Scotland. This paved the way for Laura to join the Photonics and Optoelectronic Devices MSc Programme, a joint programme between the University of St Andrews and Heriot-Watt University. From there, Laura applied for a PhD studying Single Photon Detectors in the Institute of Photonics and Quantum Sciences at Heriot-Watt University, Edinburgh. We caught up with Laura to learn more about her experiences in quantum, her work and her hopes for the future:

At the moment you are undertaking your PhD at Heriot-Watt University, what exactly is it that you are working on and what is a typical day like for you?

I’m doing research on the design and characterisation of germanium-on-silicon single photon avalanche diodes (SPADs) that detect light in the short-wave infrared wavelengths. At the moment, the detectors are fabricated at the University of Glasgow, the team there send them over to us to for testing, we find out everything about them and how good they are.

A typical day starts in the morning when I go in and cool everything down. We perform our tests at 77K, the boiling point of liquid nitrogen, so I cool everything down by putting a lot of liquid nitrogen into a cryostat containing the detectors. The cooling process takes 3 or 4 hours, so, during this time we might have meetings or go over data from the day before. I could also be writing; this is when I would write any papers or reports and things like that. In the mid-afternoon, we go into the lab and do some single-photon testing. That involves turning on the laser, reducing the power enough so there is only one photon per pulse and shining it at the photo detectors. The main characteristics of each detector are the single photon detection efficiency which is the probability that a single photon incident upon the detector will be detected, the dark count rate which is a measure of noise on the detector and the jitter which is the rate of variance in detector timing. Everything else is calculated from those, so they’re the main things. After that it’s just a lot of data analysis. So that’s a typical day!

What are the applications of single-photon detectors?

Single-photon detectors can be used for a lot of things. The specific ones we work on are gearing towards automotive LiDAR, where they send out little pulses of short-wave infrared wavelength light and use the reflections for obstacle detection, which is necessary for self-driving cars. Right now, the automotive LiDAR industry currently works at about 940mm for the detectors they’re using. Our detectors are at 1550nm wavelength, which means you can put a lot more power into them while still remaining eye safe, so it’s a more sensitive detector. You can also use them for quantum communications, and this will obviously be applicable to the telecommunication industry.

That’s an interesting question, I think my answer will be different to everyone else’s. When I did my undergraduate degree in Electrical Engineering, women made up 10% of the students, so I was used to being in the minority. But, when I came over to Scotland for my Masters, there were 5 of us on our programme and 4 of us were women, so I was in the majority there. In my lab, in my group, my postdoc and I are both women, there are several more women in the group and so, I think it’s about half and half, it doesn’t feel like a minority at all. But, I know it’s different in other areas.

Lots of people see quantum physics as incredibly difficult and therefore in some ways elitist, what is your perception?

I feel like quantum physics intimidates a lot of people. People that learn it in university for the first time often say complex things just to talk about how cool it is to people that don’t know, so, I think it’s irrationally intimidating to people that don’t take a class in it. But quantum physics is just another area of physics, it’s just another thing, once you learn it, it makes sense like the rest of science makes sense, it’s just another area. I’ve never had a specific quantum class, everything in quantum I’ve learned is applied, so from learning the applications of it, it’s just another physics thing! Applied quantum make sense because you can picture it but it’s the theoretical aspect that I think irrationally intimidates people because it’s a concept that’s hard to think about. My version of applied is sending a single photon of light, it goes into a material and gets absorbed, starting a chain reaction, this is something you can picture but there are a lot of things in quantum that you can’t picture and that’s why it gets this reputation, because it’s so hard to imagine.

Can you tell us a bit more about the potential career paths you are considering?

So, I’ve always wanted to go into science adjacent careers, not necessarily science itself, but I kept going into more schooling and now I’m getting my PhD! However, even after my undergraduate degree I felt that I didn’t really want to do research forever, but I wanted to enable other people to do it. I had a gap year before my masters and worked in a government research facility in America and we did a lot of technical things, but what was really cool was that it was a small company and I got to know nearly everyone that worked there, including the CEO. I asked him if I could shadow him and I followed him around for a few days, it was interesting to see how on a typical day he spoke to different people about funding for future projects and lobbying Congress for additional funding for ongoing projects. There is a link between communicating the needs of research and the entities that can meet those needs, whether financial or otherwise. I think it would be amazing to enable other people in their research. While I think science is interesting and cool, I don’t want to stay in the lab forever, but some people do. One of the postdocs in my group, for example, he loves being in the lab! I think it’d be really cool to go down a path to enable people like him, people who have a real passion, to let them do it. People that work with the government or in science communications and science outreach in general, need to have the technical background to know what they’re talking about and also to explain it. I think having the ability to inspire and empower other people in their research would be really cool.

What advice would you give to someone who might be interested in a career in Physics or Engineering, knowing what you know now?

I think it depends on where they are, if they’re younger then just go to university and learn things and see if they like it. If they’re in university and thinking about getting into things further, just go and talk to a professor. It sounds silly but when I was an undergraduate it seemed irrationally difficult to go and talk to a professor about their research. That’s the reason I got my PhD, I talked to my advisor after my exam for his class and said I thought the topic was really interesting, I asked him to show me around his lab and tell me more about what he does, this led to a conversation and led to me getting this PhD studentship. So, just go and talk to people, ask people what they do and what they find is cool. Talking to other people about their passions gives you more information to work with.