Being a Quantum Scientist – an interview with Robert Collins 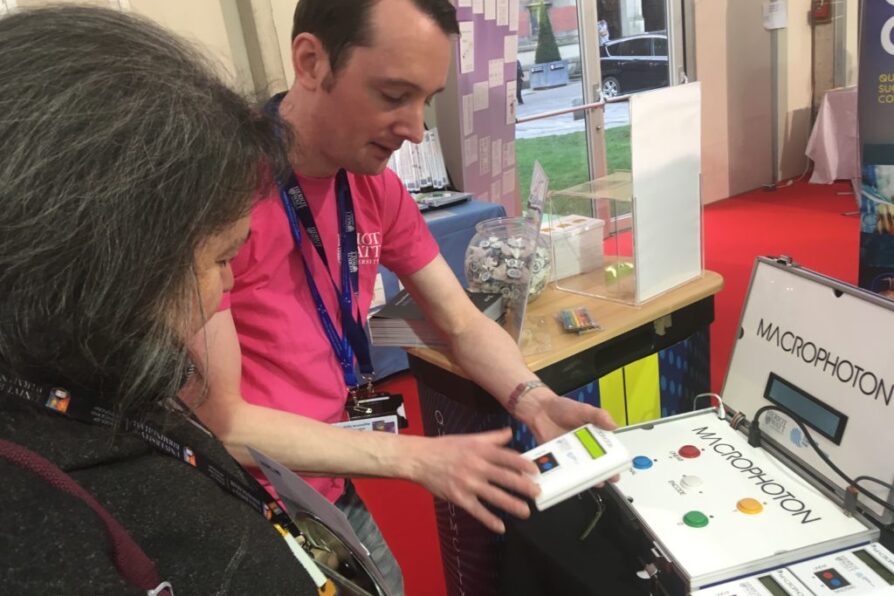 Heriot-Watt University has been at the heart of Robert’s physics journey since he began his undergraduate physics degree there and remained for his PhD and postdoctoral research associate position. Despite undertaking a general physics degree, Robert found that his studies were structured towards quantum photonics from an early stage, due to quantum photonics being such a strength of Heriot-Watt University. On researching to apply for PhDs, Robert learned of a process called quantum key distribution which really sparked his interest. Robert was successful in his application and worked on very early GHz Clock rate systems and developing them into more practical systems. Since then, Robert’s work as a postdoctoral research associate has centred around moving from technology such as quantum key distribution onto next generation quantum technologies such as quantum digital signatures or coherent state amplifiers. We caught up with Robert at the Association for Science Education (ASE) Conference in 2019 and he told us a little more about his work in Physics:

You made reference that your university had strong links to photonics, were you aware of quantum before you started as a physicist, was it something in particular that attracted you other than the direction of your teachers at that point?

Before I started my undergraduate degree, quantum was not at all something I understood, it was a word I had heard in terms of science fiction and in the media but I didn’t know what it meant. During my undergraduate course I gained an understanding of the theoretical side of quantum mechanics but not so much the experimental side. It was reading about quantum key distribution that really started to teach me that there was a practical application to this so that’s why I went on to do a PhD.

Many of the communication systems we use at the moment, for example internet browsing (with the padlock icon featuring in the browser, denoting security) or chip and pin devices are secured using what we call classical systems. These are based on mathematical approaches that we think are difficult to work out or hack, however, we have no proof that these will always be difficult to hack, so we have no proof of the long term security of many of the approaches that we are using at the moment. Quantum key distribution and related protocols such as quantum digital signals give us a way of verifying the security of transmissions so we can know that when we’re sending a transmission that there has been no eavesdropper listening in on the communication. If an eavesdropper did listen in, they would leave some sort of detectable fingerprints and that gives us what we call the verifiable security. There’s definitely a need for this and certainly in terms of portal key distribution it is a technology that is moving from the laboratory into the marketplace. Next generation technologies are looking at where we go next and what we do once we have quantum key distribution. Quantum digital signatures is what I work on and this looks at taking the idea further to having 3 parties and trying to look at what you do when you want to have transactions between these parties and keep those transactions secure.

You are a hands-on experimental physicist; is there such a thing as a typical day in the office?

This is the thing that really motivates me, there is no typical day for me because I’m working at the cutting edge or beyond the cutting edge of technology. I could be preparing conference proceedings, working in the lab, teaching students, doing outreach activities, preparing for future work and even if I’m in the lab, although I may have designed an experiment, sometimes something will happen that I don’t expect. I have that flexibility that I can go ahead, I can study it, I can examine it and it can lead to new ideas, new ways of thinking and new approaches to things. There’s always new challenges, always new ways of approaching things.

You have a PhD in quantum physics, what are the career options open to someone like you?

There are a lot of opportunities in electronic systems, data handling and data analysis. In terms of hands-on opportunities, I’m doing a lot of things with applications of light and optics etc., which are very applicable to a large number of jobs at the moment, for example in the automotive industry. Surprisingly enough, there are a huge number of the skills that you pick up in doing an experimental quantum PhD that are applicable to a wide variety of different experimental jobs.

How easy is it to get involved in quantum as it is a niche area, not necessarily a core direction for those who study physics?

It is certainly a niche area and perhaps you would need to seek out the University that has a slight specialization in quantum, but thankfully we are I think at a bit of a tipping point. We had the first round of the National Quantum Technologies Programme and we’re now moving on to the potential for the second (N.B. A second, five year [2019-2024] of funding has now been awarded). I think there’s definitely interest on a national level and indeed on an international level so we are moving towards a tipping point where it is starting to become easier and easier to become interested in quantum. Additionally, I think that as technologies start to move more from the laboratory into the applied field there will be more and more opportunities that will allow one to get involved. There are things that I can’t even visualise now that will come along in future years, using quantum technologies, so I think that we are starting to get to the point where it’s going to become more and more possible to move into the field.

You mentioned how challenging it is to visualise some of the future application of quantum mechanics so I’m going to make it easy for you and ask you to finish by naming one application that you’re particularly excited about, that is within reach.

Quantum digital signatures, because that has been taken in a very short length of time from a technology that was incredibly exciting and incredibly interesting, but very challenging to something that now I would say is very much at the same technology readiness level as quantum key distribution so the two of them can now move forward in lockstep. For me, that, I think, is the most exciting thing because I’ve actually been able to be part of the digital signatures work.

Since undertaking this interview, Robert has left Heriot-Watt University and currently works in industry as a senior technologist.