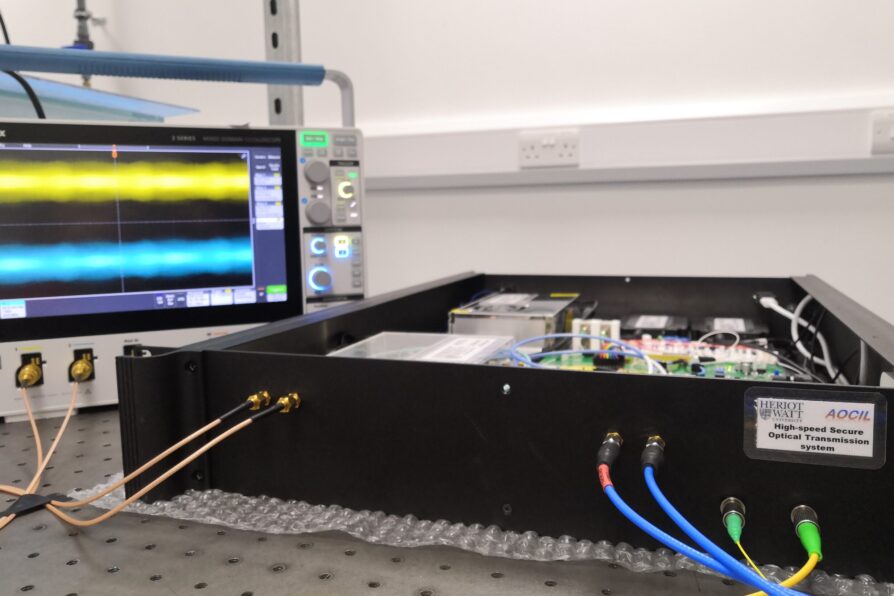 A new project aiming to enhance network security by developing and trialling a fully integrated security system has been awarded Partnership Resource funding by the Quantum Communications Hub.

The project, which is led by researchers based at Heriot Watt University and involves Hub partners the University of Cambridge and BT, will build upon a feasibility study previously funded through the Hub’s Partnership Resource Fund during Phase 1 of the UK National Quantum Technologies Programme.

Ensuring the security of information exchange in optical communication systems is one of the most important challenges surrounding communication networks, particularly as advances in quantum computing pose real and significant threats to current security approaches. In current communications systems, the security measures mainly rely upon digital data encryption methods. The strength of the security of these systems is determined by the computational difficulty of breaking the encryption algorithms, described as computational security. It is widely accepted that when quantum computers finally arrive, existing encryption techniques could be severely compromised, a prediction that obviously poses a threat to the security of communications globally. It is also known that retrospective decryption is a very real threat and data requiring long-term security should be protected now.

During the initial Hub funded project, researchers at Heriot Watt and the University of Cambridge collaborated with ADVA Optical Networking to carry out a feasibility study of a hybrid system using Quantum Key Distribution (QKD), a provably secure method of distributing encryption keys, and high-speed optical code scrambling, which is implemented into network security in the optical physical layer, to enable both computational and physical level security in an optical communication system.

Building upon this, in the new Hub Partnership Resource project, the research team will collaborate with industrial partner BT to develop an integrated QKD and optical code scrambling system, enabling quantum level security in the key exchange and physical level security in data transmission. This new system will enable ultra-high security while maintaining high data transmission rates. The prototype system will be tested in a series of field trials on the UK Quantum Network, to determine the robustness of its performance. The ultimate goal is to successfully apply such systems to a range of higher data-rate optical communication scenarios in the future.

“This project will exploit the technologies that we have researched on QKD and high-speed optical code scrambling, to develop an integrated security system that acts as a “plug-and-play” security module in high-speed optical communications networks. We will work closely with the other academic and industrial partners in this project, to progress further the potential to commercialise the technology.“