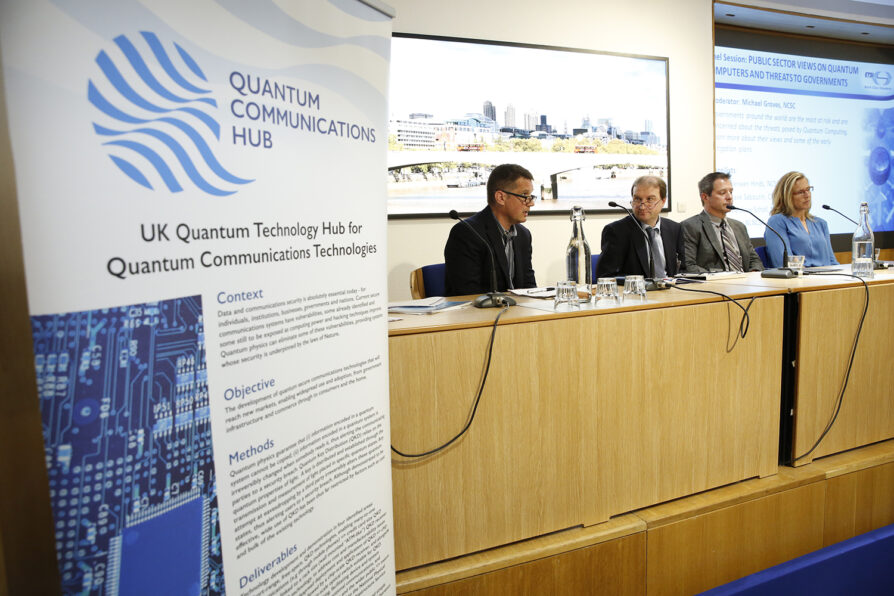 The 5th ETSI/IQC international workshop on quantum safe cryptography took place last month at the Westminster Conference Centre, London. The event was jointly co-organised by ETSI, the European Telecommunications Standards Institute, and the IQC, the University of Waterloo’s Institute of Quantum Computing, with further support provided by the Quantum Communications Hub which acted as host. The National Cyber Security Centre and CryptoWorks21 training partnership were also supporting partners.

The workshop was free of charge and structured along an executive (13/09) and technical (14-15/09) track. The main focus on the first day was on the disruptive potential of quantum computing and the technologies available to counteract subsequent threats to the existing cyber-security infrastructure. Discussions during the following two days centred on the current state of quantum-safe cryptography, the challenges of cryptographic standardisation on a global scale, the selection criteria for new encryption algorithms and specific government and industry requirements.

Keynote addresses were given by Sir Mark Walport, the Government Chief Scientific Adviser and Chief Executive Designate of UKRI, who talked on Technological Opportunities in the Quantum Age; Luke Beeson, BT’s Vice-President on Security in UK and Continental Europe, who presented on Practice Application of Quantum Key Distribution and Wider Security Implications; and Sir Peter Knight, member of the Strategic Advisory Board of the UK National Quantum Technologies Programme and the Quantum Metrology Institute (“Preventing Crypto-Apocalypse: Securing our Data against the Quantum Computer Threat”). Professor Tim Spiller, Director of the Quantum Communications Hub, gave an invited talk on the UK perspective and technologies developed in the Hub for quantum-secured encryption.

The event was oversubscribed and generated a lot of media interest, with the Wall Street Journal providing extensive coverage. All presentations from both executive and technical tracks can be downloaded from the event website.