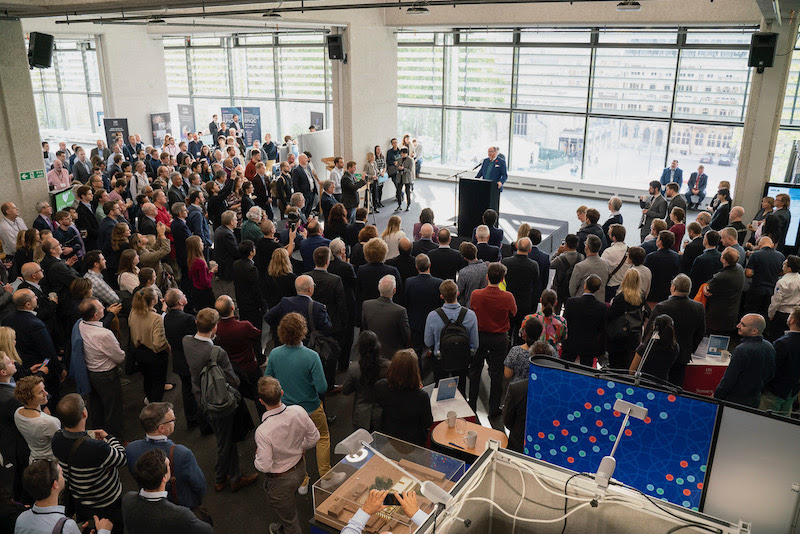 The 11th of November marked the date when the UK quantum community assembled once again at a familiar venue – the QEII Conference Centre at Westminster, London – for this year’s showcase, the flagship event in the national quantum technologies programme calendar.

The showcase aims to highlight progress in the development of various quantum technologies projects and initiatives funded by the national programme, and this year’s event marked a real milestone with over 60 exhibits, a full programme of talks and more than 1000 delegates. Organised by Innovate UK’s KTN with input from EPSRC, the  showcase included an opening address by Science Minister George Freeman MP, who said the government was on a “mission to make the UK a science superpower” and announced a new ‘global investment programme’ focusing on three key technology areas: quantum technologies, life sciences and space.

The Quantum Communications Hub participated as a gold sponsor exhibitor with a big stand showcasing a number of our technologies across various work themes.

Our University of Bristol team exhibited recent work on multi-user entanglement based quantum networking. Using VR devices they showed visitors the experimental setup and network infrastructure, alongside a 3D printed model of the network reflecting the relationship between physical and logical layers of the quantum and classical communications.

Our University of Oxford researchers brought along two fibre-wireless-fibre terminals to demonstrate beamsteering with a 10Gbps optical signal, as part of the short-distance, free-space QKD work carried out by the Hub. These automated beamsteering systems allow light from a terminal fed by an optical fibre to be directed to an identical terminal that couples light into a destination fibre, and can be used for both classical and quantum communications, as recently demonstrated with wireless optical transmission of a 1.6 Tbit/s signal and a co-existing QKD signal over a 2.5m link.

Our University of Strathclyde team demonstrated the latest version of their open-source Satellite Quantum Modelling & Analysis software (SatQuMa) developed to determine the finite key capacity in satellite-based quantum key distribution. Data analyses facilitated by SatQuMa provide a better understanding of the effects of different operational scenarios on the finite secret key length, which in turn can help inform and guide the development of source and receiver systems in future satellite missions.

The last of our Hub exhibits involved collaborative work by the Universities of Glasgow and Heriot-Watt on the development of chips with Ge-on-Si SPAD arrays as part of the Hub’s efforts towards establishing UK capability in next-generation source and detector components for quantum communications systems.

All these various technologies as well as further Hub work on standards, next generation quantum communications protocols, post-quantum cryptography, hardware security analysis and more were signposted in our Director’s, Professor Tim Spiller’s, talk on “Quantum Communications At All Distance Scales, where he made the point that quantum communications provide quantum security and as such, they are sector agnostic technologies, while he also provided examples of tech transfer from the Hub to industry.