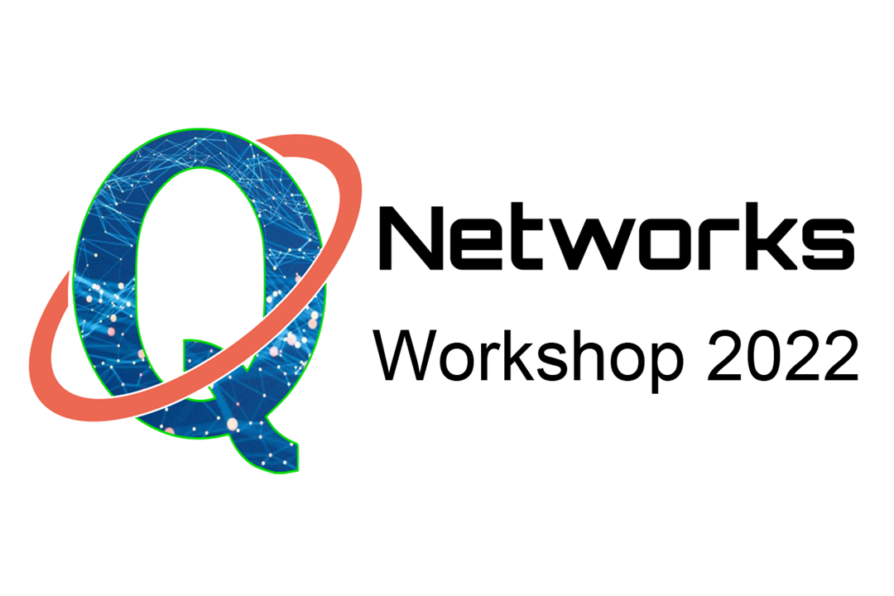 Researchers and members of quantum industry from around the world came together in Cambridge and online, on Monday 11 and Tuesday 12 April 2022, at the second instalment of the Hub organised QNetworks international workshop.

The workshop, which had over 350 registrations, saw esteemed speakers from Canada, the Netherlands, Spain, the USA and the UK present on the latest advances in quantum networking. 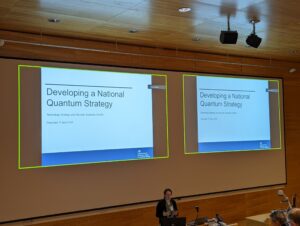 Rachel Maze of the Department for Business, Energy and Industrial Strategy (BEIS), gave an opening talk on BEIS’ work to develop the UK’s quantum strategy, including the foundations upon which it is built, current drivers and next steps. Following Rachel was Roger McKinlay of Innovate UK who gave an introduction to the UK Quantum Landscape.

The first session of the workshop, titled ‘Quantum Networks: the perspective from industry’, which was chaired by Martin Sadler of the University of Bristol, saw Carmen Palacios-Berraquero of Nu Quantum, Mark Thompson of PsiQuantum, Momtchil Peev of Huawei and Helmut Griesser of ADVA each give a short presentation on their company’s outlook on quantum networking, before a hybrid Q&A session took place.

The workshop broke for a networking lunch before the second session, titled ‘Progress towards the Quantum Internet’, took place. This session was chaired by Reza Nejabati, a Quantum Communications Hub investigator based at the University of Bristol. Joining the workshop virtually, Vicente Martin of the Universidad Politécnica de Madrid, opened the session by giving an overview of the work on the SDN-QKD testbed in Madrid. Following Vicente, Wolfgang Tittel of QuTech and Kavli Institute of Nanoscience, TU Delft, Department of Applied Physics, University of Geneva, and Schaffhausen Institute of Technology in Geneva, presented ‘Quantum network technology – the second life of rare-earth crystals’. Adrian Wonfor, a Hub investigator based at the University of Cambridge, then gave an overview of QKD secured networks in the UK, including the Hub launched UK Quantum Network and the UKQNtel, before Liang Jiang of the University of Chicago closed the session by presenting an interesting talk titled ‘Quantum Data Centers’. Questions from the audience, both asked in-person and submitted online, were then posed to the panel of speakers. 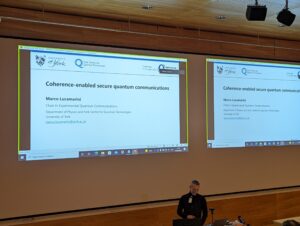 The final session of day one, titled ‘Quantum entanglement networking’ and chaired by Siddarth Joshi, a Hub researcher based at the University of Bristol, opened with a talk titled ‘Coherence-enabled secure quantum communications’ by Marco Lucamarini of the University of York. Following Marco, former session chair Reza Nejabati then presented the talk ‘Dynamic and autonomous quantum entanglement network’ before Mohsen Razavi of the University of Leeds gave an update on his work on ‘Quantum Key Distribution over Encoded Quantum Repeaters’. Joining the workshop virtually, Daniel Higginbottom of Simon Fraser University then spoke about ‘Optical observation of single spins in silicon’ before another virtual presenter, Maria Spiropulu of Caltech, gave the talk ‘Quantum Teleportation Networks’. Again, a hybrid Q&A session took place with many excellent questions being asked by the audience. In-person delegates were then invited to an informal networking reception in the William Gates Building at the University of Cambridge.

Attendees returned on Tuesday 12 April for the final session of the workshop, ‘Devices for quantum networking’, chaired by Hub investigator Richard Penty of the University of Cambridge. Opening the session and giving an overview of his work on ‘Si-SiN integrated photonic switch fabrics – potential for use in quantum networks’, was Qixiang Cheng also from the University of Cambridge. Following Qixiang was Hub investigator Roger Colbeck of the University of York who spoke about his work on the ’Assurance of quantum random number generators’, including the AQuRAND ISCF funded project. 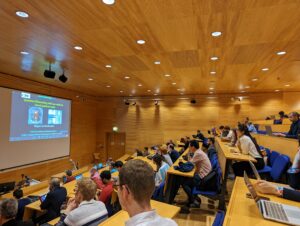 Mete Atatüre of the University of Cambridge then spoke about ‘Light-Matter Quantum Interfaces in Diamond’ before Hugues de Riedmatten of the Institute of Photonic Sciences joined virtually to present ‘Quantum Networking with solid-state rare-earth ion based quantum nodes’. Wrapping up the talks was Gabriel Araneda Machuca of the University of Oxford, who spoke about his work to develop ‘a two-node trapped ion quantum processor’. A final packed Q&A session then occurred, with questions from the audience spread across all talks and speakers.

The workshop closed with thanks extended from Richard, on behalf of the organising committee, to the speakers and attendees from around the world who joined the workshop in-person, and virtually. Richard commented on the excellent content presented throughout the workshop and how the programme of talks proved that there is a fantastic amount of interesting work going on in the area of quantum networking, with the potential for even more to be done in the coming years, making it a real ‘hot topic’ to watch.

With this being the first in-person workshop that many delegates joining us in Cambridge had attended since the start of the pandemic, it was very well received and a huge success, as was clear by the number of delegates, excellent questions asked and networking that took place across the two days.

To be notified of any similar events taking place in future, sign up to the Hub newsletter or check our events page or Twitter feed regularly.