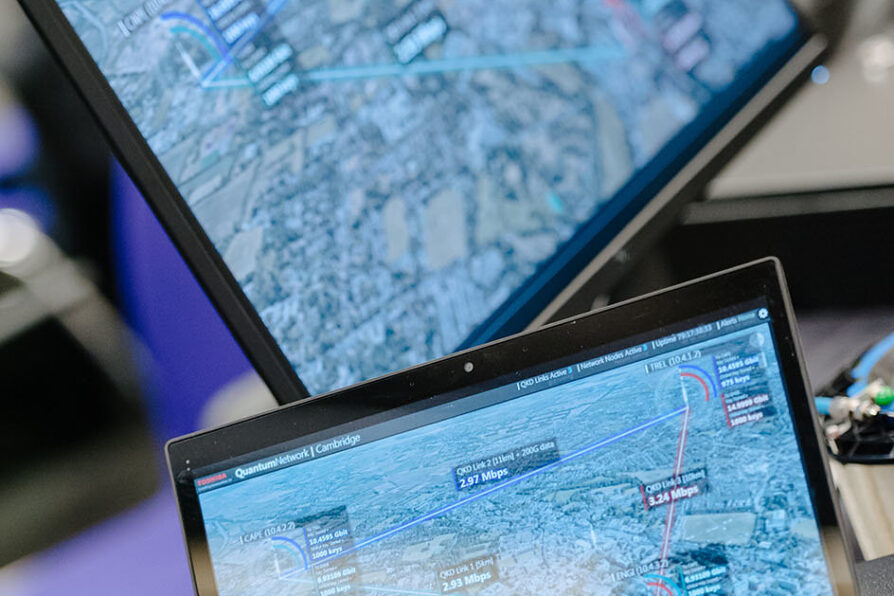 The UK’s first quantum network, a major Hub deliverable, was launched today in Cambridge, enabling ‘unhackable’ communications, made secure by the laws of physics, between three sites around the city.

The ‘metro’ network provides secure quantum communications between the Electronic Engineering Division at West Cambridge, the Department of Engineering in the city centre and Toshiba Research Europe Ltd (TREL) on the Cambridge Science Park.

Quantum links are so secure because they rely on particles of light, or photons, to transmit encryption keys through the optical fibre. Should an attacker attempt to intercept the communication, the key itself changes through the laws of quantum mechanics, thus alerting the communicating parties to the presence of an eavesdropper.

Researchers have been testing the ultra-secure network for the last year, providing stable generation of quantum keys at rates between two and three megabits per second. These keys are used to securely encrypt data, both in transit and in storage. Performance has exceeded expectations, with the highest recorded sustained generation of keys in field trials that include encryption of data in multiple 100 gigabit channels.

The Cambridge network was built by partners in the Quantum Communications Hub, a consortium of eight UK universities, as well as private sector companies and public sector stakeholders. The local infrastructure was provided by TREL, who supplied the quantum key distribution (QKD) systems; ADVA, who supplied the optical transmission equipment; and the University’s Granta Backbone
Network, which provided the optical fibre.

The UK Quantum Network is funded by the Engineering and Physical Sciences Research Council (EPSRC) through the UK’s National Quantum Technologies Programme. It brings together concentrations of research excellence and innovation, facilitating greater collaboration between the two in development of applications that exploit the unique formal guarantee of security provided by
quantum physics.

“Through this network we can further improve quantum communications technologies and interoperability, explore and develop applications and services, and also demonstrate these to potential end users and future customers,” said Professor Timothy Spiller of the University of York, and Director of the Quantum Communications Hub.

“The development of the UK Quantum Network has already led to a much greater understanding of the potential of this technology in secure applications in a range of fields, in addition to bringing new insights into the operation of the systems in practice,” said Professor Ian White from Cambridge’s Department of Engineering. “I have no doubt that the network will bring much benefit in the future to researchers, developers and users.”

“Working with the Quantum Communications Hub, Cambridge and ADVA has allowed us to develop an interface for delivering quantum keys to applications,” said Dr Andrew Shields, Assistant Director of Toshiba Research Europe Ltd. “In the coming years the network will be an important resource for developing new applications and use cases.”

“Development of the network has brought together in the Quantum Communications Hub partnership many world-class researchers and facilities from both UK universities and industry,” said Dr Liam Blackwell, Head of Quantum Technologies at EPSRC. “This is a reflection of EPSRC’s commitment to investing in UK leadership in advanced research and innovation in quantum