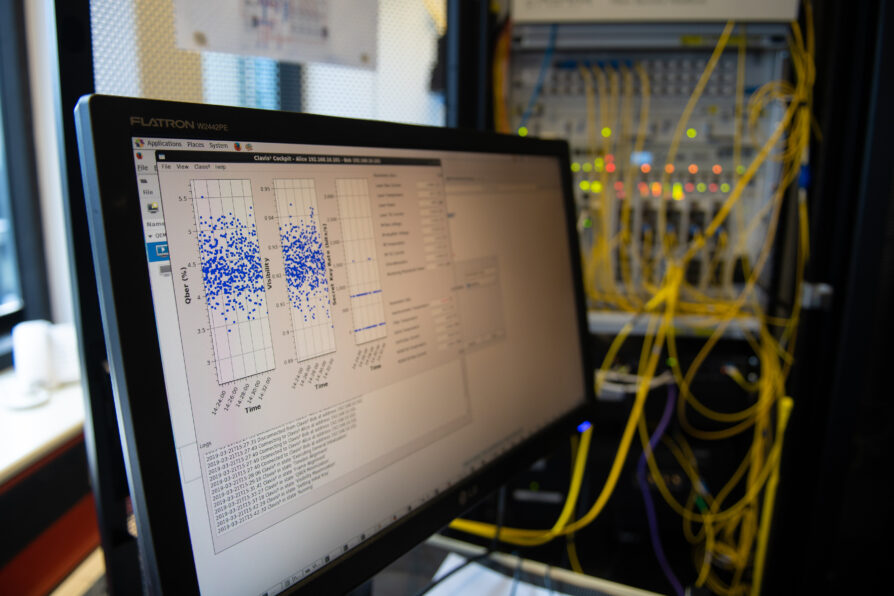 Numerous Quantum Communications Hub partners came together last month to celebrate the official launch of the newest UK Quantum Network (UKQN) link – UKQNtel. Taking place across both ends of the link – BT’s Research Labs at Adastral Park and the Cambridge Engineering Department at Cambridge Science Park – the event was jointly organised by the project’s key delivery partners: the Universities of Cambridge and York, and lead industrial partner BT.  The day was a huge success, attended by more than 100 specially invited guests and key stakeholders representing the UK’s National Quantum Technologies Programme; the key address on the day was given by Nick Chism, Director General, Enterprise, at BEIS.

Information security is absolutely essential in today’s data driven society – for individuals, institutions, businesses, and governments. Current secure communications systems have known vulnerabilities, some already at risk now and others that may be exposed in the future, as (quantum) computing power and hacking techniques improve. Secure communications based on quantum physics can eliminate some of these vulnerabilities, providing systems whose security is underpinned by the laws of Nature, for example through the secure distribution of cryptographic keys. Existing prototypes employ quantum uncertainty and randomness for security, and next-generation technologies may well use the even weirder and counter-intuitive feature of entanglement. This project is part of the Quantum Communications Hub’s portfolio of prototype technologies in the area of quantum secure communications and networking. The link forms part of the wider UK Quantum Network being built by the Hub as a testing platform to integrate QKD into secure communication infrastructures at access, metropolitan and inter-city scales, thus enabling device and system trials, integration of quantum and conventional communications, and technology demonstrations for user engagement.

The new connection stretches from BT’s Adastral Park research campus near Ipswich in the East of England – the company’s global research and development headquarters – to the Cambridge Science Park. More widely, it connects the high-tech ICT industry clusters at each end: the Silicon Fen and Innovation Martlesham. This opens the door to a huge range of trial projects focused on quantum secure network technologies and services with potential for exploitation by industry. The wider UKQN network then extends onward over the National Dark Fibre Infrastructure Service to Bristol in the South-West. The new high-speed link uses over 125km of standard BT optical fibre between Cambridge and Adastral Park, with BT Exchanges acting as ‘trusted nodes’ along the route. The link will carry both quantum and non-quantum traffic; data encryption keys are being shared using Quantum Key Distribution (QKD) via an ultra-secure quantum channel over the same fibre that carries the encrypted data itself. Fellow industrial partners ID Quantique and ADVA have contributed extensively by supplying the QKD systems and optical transmission equipment, and the system-specific expertise required to integrate it. The National Physical Laboratory is working with all the partners to develop the measurements necessary to help assess the security of the network’s distributed QKD keys.

Intended to stimulate and support the commercial exploitation of quantum research by UK industry UKQNtel is a clear embodiment of the collaboration between research and industry that is central to the UK’s National Quantum Technologies Programme. The link is co-funded through the Quantum Communications Hub by the Engineering and Physical Sciences Research Council and BT.

Chris Skidmore, Minister of State for Universities, Science, Research and Innovation, said: “The first ever commercial grade, quantum network link between Suffolk and Cambridge is an important step in protecting the UK from cyber threats. The success of our modern Industrial Strategy depends on us maintaining the UK as a hotbed of innovation. We have identified AI and Data as a Grand Challenge to ensure we build on our world-leading reputation in harnessing new technologies, which we will achieve in quantum technology through continued collaboration between industry, government and the National Quantum Technologies Programme.”

Tim Whitley, MD of Research for BT, said: “The BT Labs at Adastral Park have played a central role in the development of the fibre optic networks that we now take for granted as the backbone of global communications. We’re proud to be at the forefront of the next generation of network design, helping the UK take the lead in the development of ultra-secure quantum networks, and keeping our customers’ data safe in years to come.”

Tim Spiller, Director, Quantum Communications Hub, greeting the Adastral Park audience over quantum encrypted secure link while at the other end of the network, at Cambridge