Looking to the future with Quantum City at New Scientist Live 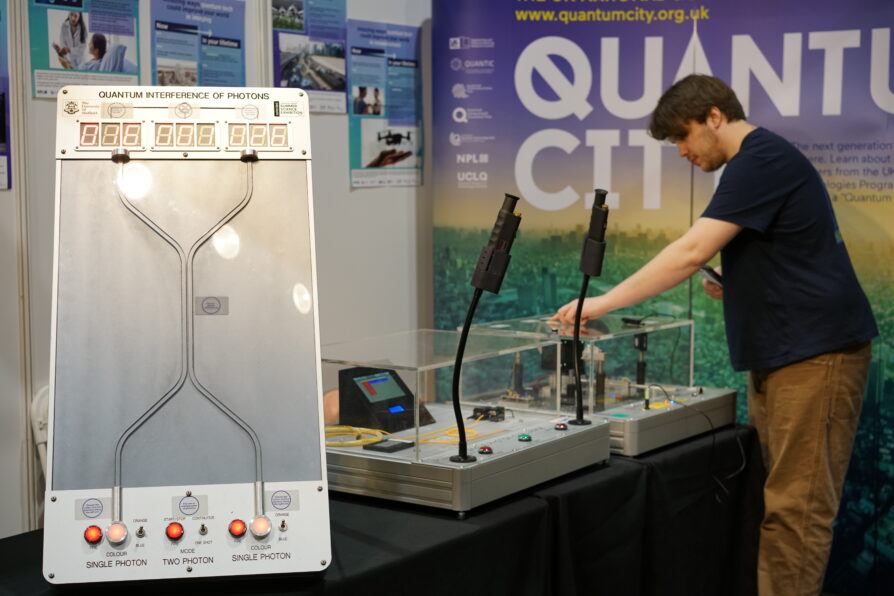 Quantum City is back again – this time at New Scientist Live (NSL), which is taking place in London between 7-9 October 2022. NSL is considered to be one of the UK’s biggest festivals of ideas and discoveries, and this event will mark the third time Quantum City will have had a presence representing all the partners of the UK National Quantum Technologies Programme (NQTP) – a £1 billion partnership between government, academia and industry.

The exhibit will comprise a number of exciting demos demonstrating the various capabilities and impact of quantum technologies. Among these is The Quantum Second, a demo hosted by the National Physical Laboratory (NPL) demonstrating how atoms resonate at very specific frequencies – a measure which can be used as frequency standards for high precision clocks. Atomic timekeeping underpins technologies that are part of daily lives, such as mobile phones, the internet and global navigation satellite systems.

The Quantum Communications Hub, represented by the University of Sheffield, will also be hosting a number of demos around the Hub’s core research on quantum-enabled secure communications. NSL attendees will be able to explore beamsplitters – key optical components in quantum computing – and photons through their Quantum Interference of Photons demo, which explores the quantum behaviour of photons, that is particles of light.

Using quantum interaction between light and matter, atoms are trapped and held at temperatures of less than a few millikelvin, making them a perfect test mass for measurements of gravity and timing. The geophysics team at the UK Quantum Technology Hub Sensors and Timing will be hosting their Interactive Cold Atom Demonstrator, which uses lasers and magnets in ultra-high vacuum to trap atoms. Exhibit attendees will be able to attempt trapping atoms themselves to try and achieve the highest score!

For more information on New Scientist Live, including programme and registration details, please visit the website at https://live.newscientist.com/.