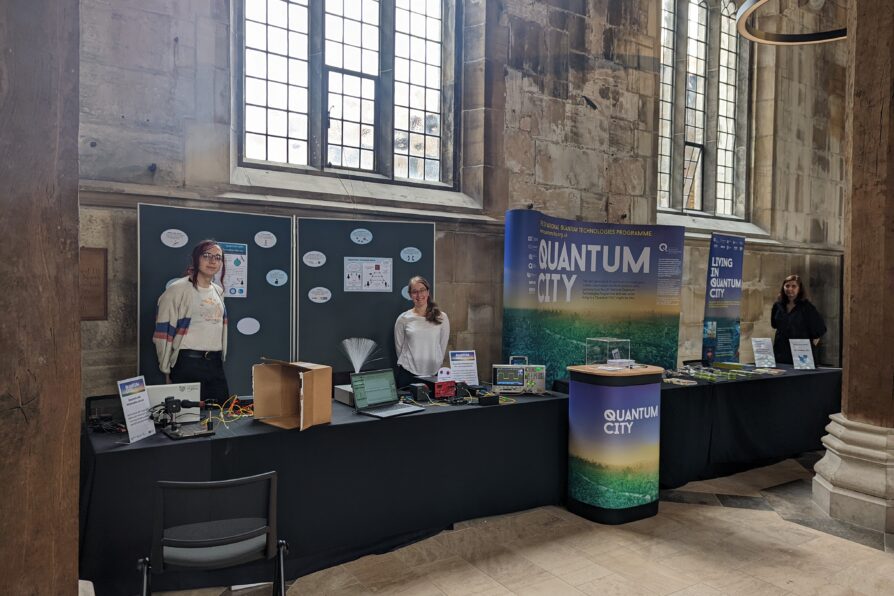 On Sunday 12 June 2022, the Quantum Communications Hub held a stand at the York Festival of Ideas Discovery Zone event, which took place at the newly renovated Guildhall in the city centre.

As part of the stand, Hub PhD students based at the University of York’s Experimental Quantum Communications Group, part of the York Centre for Quantum Technologies, took two hands-on demonstrations for visitors to engage with.

The first demonstration, created by Karolina Schatz, titled ‘Quantum entanglement for communications’, introduced visitors to the concept of quantum entanglement, the property that gives correlations – stronger than any with which we are familiar in everyday life – between two or more quantum systems, even when these are separated by large distances. Karolina explained how she is using entanglement in her work and how it could facilitate un-hackable communications between parties, even when they are separated by long distances.

The second demonstration, created by Ry Render, titled ‘Quantum with deformable mirrors’, enabled visitors to get hands-on with a laser and some deformable mirrors to discover how the mirrors are used to counteract atmospheric turbulence which poses issues for quantum secure communications through free-space. This type of technology could potentially be used in the future as part of the establishment of a global quantum secure network.

Attendees also had the opportunity to find out more about Quantum City, the public engagement arm of the UK National Quantum Technologies Programme, and take away materials.

Feedback from attendees was very positive with some visitors saying that the demonstrations were “awesome” and “really cool”.

Images of the event can be seen below (click to enlarge). 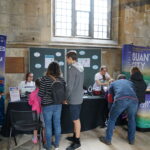 Visitors at the Communicating with Quantum stand

Visitors engaging with the ‘Quantum entanglement for communications’ demonstration 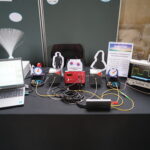 The ‘Quantum entanglement for communications’ demonstration 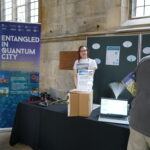 The ‘Quantum with deformable mirrors’ demonstration