Quantum Shorts returns with a new call for films 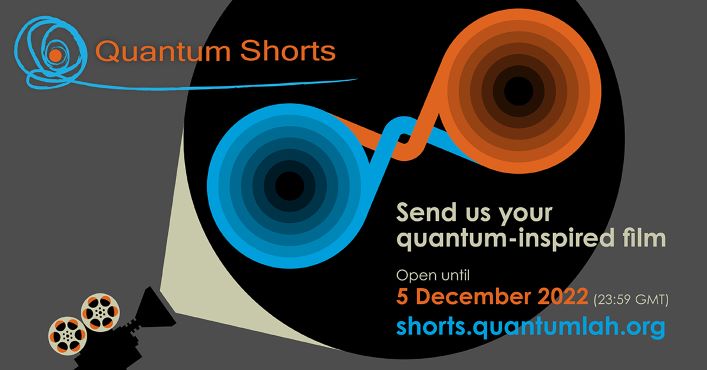 Since 2012, Quantum Shorts has launched annual calls for creative quantum works of film and short stories. Now the international contest is back. Until 5 December, Quantum Shorts is accepting short films that tell a quantum story in five minutes. The contest is free to enter and offers prizes of up to USD1500.

Quantum physics describes what particles of light and matter do. That can mean existing in superpositions and getting spookily entangled in ways that may help us do useful things, like
compute quickly, communicate securely and sense precisely. What can creative filmmakers do with these quantum ideas?

Through the years, filmmakers have reached the shortlist of this contest – and thrilled audiences around the world – in wildly different ways. From visualising quantum phenomena to narratives told across many worlds, the contest welcomes submissions of all kinds. “Quantum physicists today often talk about the technologies we can build, but our science contributes to culture too. In Quantum Shorts, we celebrate this dimension of exploring nature at the ultimate level,” says festival judge José Ignacio Latorre, Director of the Centre for Quantum Technologies (CQT) in Singapore. CQT organises the festival with the support of media partners Scientific American and Nature and scientific partners that are renowned quantum research institutes.

Up to ten films will be selected to win prizes and be shown at international screenings. Judging for the Quantum Shorts film festival will take place in two stages. A shortlisting panel
nominated by the scientific partners will select up to ten finalists. These shortlisted films will win a prize of USD250, a certificate and a one-year digital subscription to Scientific American.
Quantum Shorts will then call on a panel of eminent judges to decide two top prizes. Joining Latorre on this panel are Ágnes Mócsy, scientist and filmmaker; Alex Winter, filmmaker and actor; Honor Harger, Vice President of the ArtScience Museum; Jamie Lochhead, director and executive producer; and Neal Hartman, Director of the CineGlobe film festival.

The public will also get their say on a final award – a public vote on the shortlist will determine the People’s Choice prize. Winners stand to receive a cash award of USD1500 for first place, USD1000 for runner up and USD500 for people’s choice. Plans are in the works for screenings of the shortlisted films to take place in 2023 – look out for event details to come at the Quantum Shorts website at shorts.quantumlah.org. The website also hosts past film and fiction winners.

Filmmakers keen to enter the festival can find on the website a full set of rules and guidelines.
Quantum Shorts is accepting submissions through the festival platform FilmFreeway. Submissions close at 23:59 GMT on 5 December 2022.